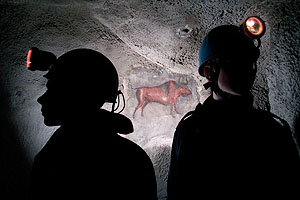 There are many reasons for using a silhouette, and the most common is to preserve the anonymity of the subject. The identity of children is something we are often asked to keep secret – especially if that child has been in trouble with the authorities.

This is one of those and it concerns some young men being taken on adventure training by Police Officers as a way of keping them out of more trouble.

1. There was no available light, so we had to use torches to focus by and a long exposure to get the head torches to show.

2. The background metered at f16 on the 50 joule setting which gave enough depth of field to have everything in focus. The shutter speed needed to get the torches to give the correct amount of glow was 1/2 second.

3. The LCD screen was used to check that everything was OK before shooting a few frames with each of a range of shutter speeds ranging from 2 seconds to 1/8th concentrating on the 1/2 second that turned out to be correct.

It was as simple as that! The silhouette gave the shot an air of mystery and provided the anonymity that the law required. There was some running water behind where the boys were standing and so I used one of the Police Officers present as a human lighting stand – simply getting him to hold the Lumedyne flash head in the right place for me.