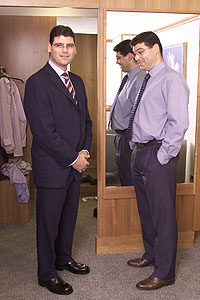 As a good and honest news photographer I would never alter a photograph without clearly announcing in the caption that I had done so – and in capital letters too. This story about two teachers given a makeover so that their appearance at work fitted in with their position was best illustrated with before and after pictures, so why not make it a single image?

The idea was very simple, shoot the same scene twice – once with the subject in the left had half of the frame and once with him in the right hand half. Cut the images in two and join the two halves with him in together without being able to see the join. Simple plan, so many potential pitfalls.

I decided to do it as simply as I could and that meant having a physical line down the image along which to make the join, although the small space gave me a few worries about the patterned carpet. Having planned this idea in advance, I took my Manfrotto tripod with me as well as my usual Lumedyne flash units. I had never met the subjects before, and hadn’t asked the store if they would cooperate with my idea so it could have gone horribly wrong!

One of the great advantages of shooting digitally is that you can show people your ideas as you go, you can involve them in the conspiracy that is a heavily constructed image. My first task was to do some fly on the wall pictures of the subjects choosing some clothes as they walked around the store. I could write an essay on the nightmare that is the wide variety of white balances that can occur within a few feet in a large department store (and maybe I will one day!), but for now lets get back to the story.

Clothes chosen, it was back to the various fitting suites for our models so (as a gentleman) I left the lady to her fashion adviser and went with the man to see what he thought of his choices. After shooting some more reportage type pictures he was ready top take part in my big idea. I explained it all, and he was up for it so while he got changed into his smartest outfit I got to work.

The first thing to do is find a composition which has a middle line and enough space on either side to put what you need to put there. The fitting room itself has plenty of vertical lines and the cleanest is the edge of the door. I put my tripod in place and messed around until I had the compostion perfect. I then showed my subject what I wanted him to do.

I had to keep the lighting very simple so it lit the whole scene evenly without getting any nasty reflections in the mirror. The easiest way to light the scene was to use the large white wall that was three feet behind the camera and bounce the Lumedyne flash off of it. I decided that I needed plenty of depth of field, so is set the pack to 400 joules. At 200 ISO this gave me an aperture of f8, which worked well. The rest of the shoot was all about posing the subject. I started with the smart outfit, and realised pretty quickly that he needed to look assured. Looking straight into camera is the easiest way to make someone look confident so I shot several of the left hand frames with him looking at me. I made sure that the camera didn’t move, and that the light didn’t move while he went into the fitting room and changed back into the clothes that he arrived in.

Now I concentrated on the right hand side of the frame and got my subject to look at the space where he had been standing. My subject had seen his “left hand image” so he completely understood what I was asking him to do. I had to make sure that he didn’t cross my centre line and shot a wide variety of expressions and poses. I had to do a similar shot with my female subject so that the two images would work together so I repeated the process in the women’s fitting area.

Just to be safe I shot a lot of other pictures both inside and outside the store. Sometimes the hot idea discussed in the office before the shoot doesn’t come together, so it’s always best to have plans B and C just in case. It’s a fun story, so relaxing journalistic ethics along with the rights captions is completely at home in this situation. A good tripod is an essential tool.