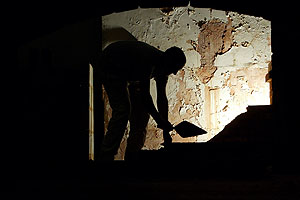 One of the very first technique pages that I posted on this site was about silhouettes. I mentioned that they were great for keeping people anonymous where there were child protection issues and legal issues over indentifying people. On rare occasions you go to shoot a story and nobody is willing to have their picture taken – they don’t want to be in the newspaper!

This was one of those occasions. The story was about a college where unemployed people were learning skills that culd not only get them back into work but help fill certain skills gaps in the workforce. This particular student was on a property conservation and restoration course and he was doing some brickwork in an old building. I used the LCD on my camera with a “test shot” of one of the PR people to prove to hime that I could do a decent silhouette and so he agreed to do a bit of work for the camera.

Pocket Wizards (other flash trigger systems are available) are wondeful things. They allow you to place flash units almost anywhere and trigger them effectively.
There is a Lumedyne head wedged between brickss behind the wall on the right of the frame and it is et to 1/4 power (50 joules) with the protective diffuser cap over the reflector both for safety and diffusion. It is pointed at the wall behind our man and there is a small piece of wood placed so that none of the flash strays onto him while he works.

There was definitely no detail in the student but the background was still a little dark. I opened up to f8 and also pointed the flash head down a bit and shot a dozen different pictures on a 70-200 f2.8 L lens. The distance between me and the student seemed to relax him and he really got into being a silhouette working away in his hole in the wall.

After a while he relented and we shot some pictures which did identify him, but by then I had this and I was pretty sure that the image would not only run that week but also be a keeper for the archive appropriately keyworded.