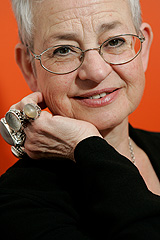 I did some evenly lit pictures of the author looking through the letters, some close ups of her hands wearing her trade mark rings sorting through papers and then I had the idea of getting her to look into the box and to make it “magical” in the same way that her books grab the imagination of children. After a few frames of evenly lit pictures I decided to place a second flash unit inside the box, mainly to give her face better highlights. Balancing the Lumedyne flash that I had been using on it’s own with the Canon 550ex speedlight placed inside the box was a relatively simple task and with both flash units attached to Pocket Wizard receivers everything went pretty easily.After getting the “safe” shot in the can I decided to turn off the main Lumedyne flash and just use the small Canon Speedlight inside the box which by this stage was loosely covered by about three sheets of paper with children’s drawings and writing on. The speedlight had a Sto-Fen Omnibounce over the reflector and was on manual set to 1/4 power.

This gave me a flash exposure at 100 ISO of f5.6 which was plenty and so I dialed down the shutter speed to 1/250th just to make sure that there was no ambient light in the picture. This made some decent pictures but I decided to allow the available light to play a part in the exposure too and so I changed the shutter speed to 1/8th of a second which meant that it was still about one and a half f-stops under exposed. The flash was illuminating the author’s face nicely and the insides of booth the box and the lid were also well exposed using this pretty primitive technique. 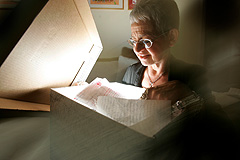 The thing that helps with the magic of this picture is the movement, which is achieved by actively moving the camera whilst the shutter is open. I have talked about this before and so won’t go back too much over the theory behind it except to point out that I normally don’t like flash and blur images where there are no points of light to give that blur. Evenly lit scenes are normally very difficult to make good blur from and it only worked in this case because the author’s face was slightly in shadow and because the available light exposure is still over one stop underexposed at 1/8th of a second at f5.6 on ISO 100.

The flash and blur picture above as shot on a Canon EOS1D MkII with a Canon 16-35 f2.8L lens. The flash used was a Canon 550ex triggered with a Pocket Wizard. For the record, the image on the left was shot on the same model of camera with a 24-70 f2.8L lens. It was shot at ISO200 using a Canon 550ex flash with a Sto-fen off to the right of the camera about two metres away and there were white walls and a white ceiling to reflect plenty of light back to make the lighting reasonably soft and quite flattering.