Everyone who has ever read books to very young children should have seen “The Very Hungry Caterpillar”. It’s an absolute classic and, back in 1999 I had five minutes to shoot a portrait of Eric Carle, the American writer and illustrator who created it at a London Hotel. I should have had longer but I was badly late because I’d been given the wrong address but he was charming, patient and his PR people were relaxed as well. At the time, he was 70 years old and the book was coming out as a 30th anniversary edition. 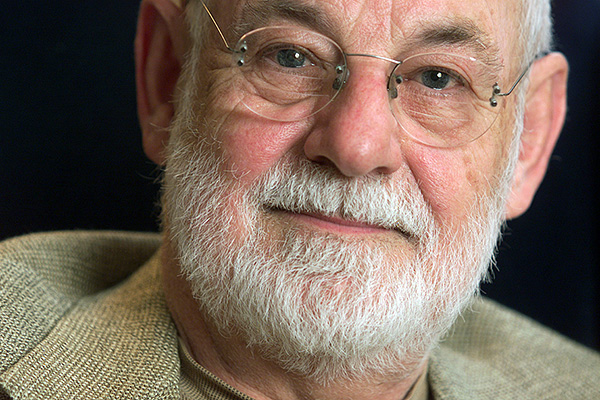 As soon as I got there, I set up my Lumedyne battery powered light with a simple shoot-through umbrella and started to work.  The author was sat in a high backed chair and I decided to work around where he was already sitting – he looked relaxed and I was still in “full apology mode”.

Although this was nearly 13 years ago I can still remember a random throughout that came into my head “if I were casting someone to be Santa Claus, it would be this guy”. From then onwards all I could see was a really nice bloke with a twinkle in his eye that children would adore. The fact that he must have illuminated millions of childhoods was certainly in my mind and we shot some very nice pictures very quickly.

This set of eight pictures is all that remains from the shoot. Back in 1999 storage was still expensive and the company policy was to use Zip discs (remember them?). My laptop had a zip drive and I put the wider edit onto the “official” zip disc and kept the tight edit on another disc for my own records. The official disc with the Kodak RAW files was lost somewhere in the mists of time and we didn’t discover that it was gone until we started to upload the entire back catalogue into a managed and backed-up library a couple of years later. You learn from your mistakes.

I like the simple and innocent tight composition of frame 004 and I love the expression of frame 007. I have read his books to young members of the family ever since and I try really hard to do so with the same twinkle in my eye that the author had.