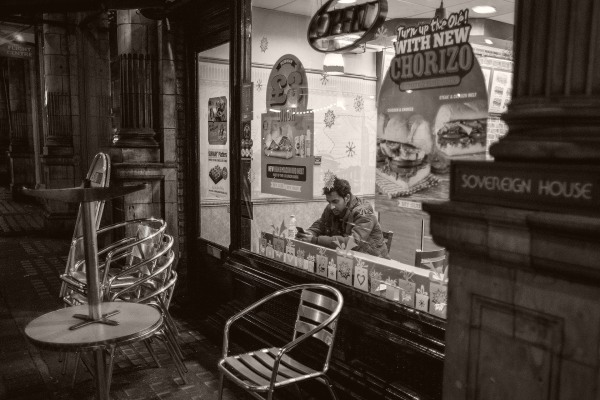 Sitting in the window seat at Subway on Shaftesbury Avenue
© Neil Turner, November 2014.

This photograph falls into the ‘personal work’ category. I had been to a meeting in central London during the evening and had arrived fashionably on-time having failed to park in my favourite evening parking space near the location of the meeting. That had forced me to park a bit further away. As a result my walk back to my car at around 10.30pm was both longer and much more interesting than usual.

I nearly always have a camera with me and it is nearly always either my Fujifilm X100S or it’s little brother the X20 but on this evening I had a Canon EOS6D with a couple of fast prime lenses and so I shot some photographs of things that interested me as I walked. This shop window – a branch of Subway that stays open until the early hours was the very first thing that caught my eye and I was very interested to see just how good the EOS6D is at higher ISOs. This was shot at 3200 ISO with a shutter speed of 1/250th of a second at f1.8 using a Canon EF 28mm f1.8 lens. For a DSLR this is about as unobtrusive as you can get – the quiet shutter mode is really good and the speed and accuracy of the auto focus on the centre focusing point means that you can ‘snatch’ a frame in really low light with quite a high degree of certainty.

Just around the corner I saw the potential for another nice image with the frontage of a theatre after the last member of the public had left the building. I composed, waited and finally got this frame as a solo pedestrian passed through the frame. 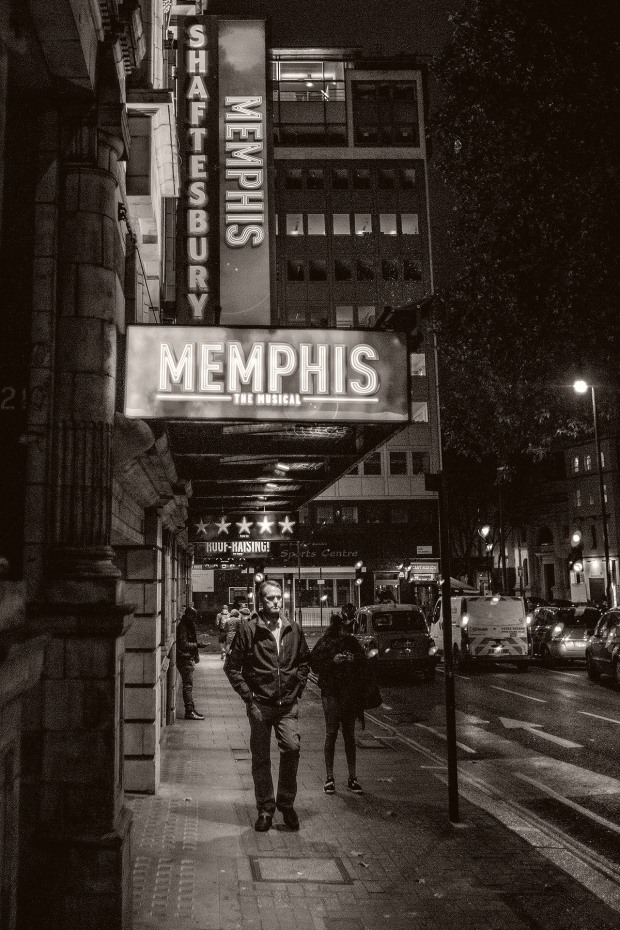 Pedestrian passes under the “Memphis” banner outside a west end theatre at night. © Neil Turner November 2014.

This photograph was also shot at 3200 ISO but was better lit at 1/640th of a second at f1.8. I was actually quite disappointed when I got back to my car and realised that I had a two and a half hour drive home. I knew that I had half a dozen good photographs and I sat in the car and transferred a couple of them to my phone using the camera’s built-in wifi before uploading them to EyeEm and Twitter. Then I drove home…