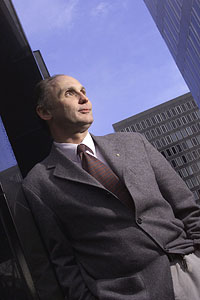 Sometimes you have no other option than to get your flash unit out of it’s hot shoe and make it perform like a studio style strobe. Whether it’s the Canon 550ex, the Nikon SB28DX or another make altogether there are some simple steps you can take to produce cultured and interesting images.

The telephone message goes something like this: “Meet this guy, not sure of his name yet at Euston railway station and take him somewhere to shoot a nice portrait. We’ll probably only use a mugshot, so don’t go mad.” The second message wasn’t a lot better, but I was well on my way to one of Europe’s busiest rail stations to meet the man with no name who was to meet me by platform six. The third call said “His name is Molyneux, he’s about fifty and he’s there now”. I jumped out of the car (having parked it legally) and with camera bag in hand I ran to meet my man. Knowing the area well I planned to drag him back to a small park, via the car to grab lights, and shoot some outdoor portraits in the evening sunshine.

Having found him a lot more easily than I had bargained for I then discovered that he was shortly to catch a train and had to be interviewed in the mean time. This gave me about ten minutes to shoot the pictures and no way of getting back to the car to gather kit, oh! and it was about to rain.

The sky was still blue just outside the station concourse and the buildings gave us an area of shade so I decided to go with a similar idea to the “shooting from the shade” technique explained a few months ago. Because I am a Canon user I took advantage of the excellent ST-E2 flash transmitter on the camera and the 550ex flash unit in slave mode but because I chose to shoot with the flash in manual the technique applies to any unit that has a manual output mode.I put a Sto-fen diffuser on the 550 and set it to 1/8th power. The journalist turned up on cue so I got him to hold the flash at an angle of about 35 degrees to the axis of the flash at a distance of two metres.

With my 17-35 lens on my camera I shot a test frame and looked at it on the LCD. The sky which I had metered at 1/250th of a second at f8 was exposed perfectly, but the subject was underexposed. I set the flash to 1/4 power and tried again, but the subject was still a little dark. I moved my makeshift assistant forward by about 50 cm and the third test was spot on. The important thing at this point is to maintain the flash to subject distance so I made sure that was taken care of before shooting a variety of angles with the subject looking into camera for some pictures and straight at the flash for others. I also varied the angle of the flash in relation to the axis of the lens whilst maintaining the height of the flash above the subjects eye level to about ten degrees. The image above was shot with the zoom at 24mm (40mm equivalent angle of view) and with the flash at about 40 degrees from the lens axis.

The entire shoot lasted less than five minutes, including a few mugshots. The journalist got his interview and Mr. Molyneux got his train. Life is sweet.