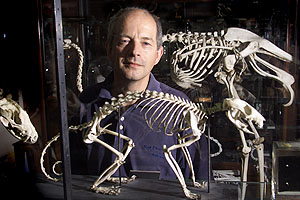 Having glass or any reflective surface in a photograph normally strikes fear into the heart of most photographers. This portrait has at least ten panes of glass in shot, but careful lighting and liberal use of the LCD screen on my digital camera made the glass nearly invisible.

The scientist featured in this portrait is an eminent professor of Biology at the University of Sheffield. For those of you unfamiliar with the geography of the United Kingdom, it’s a good four hour drive from central London so I had plenty of time to make plans of how the shoot would go in my head.
I had been briefed that there was a museum at the University and that the professor was it’s senior curator in his spare time. Museums = glass cases = trouble. The portrait was part of a series of about fourteen that had to have two shots.

The first had to match one another and the second (this one) had to be very different from one another. There were few places around the campus that offered an interesting environment so I decided that once the simple shot was over I would try the museum. The rows of cases with animal skeletons in the virtual darkness were an instant inspiration. Once I had decided which two cases to put him between I set about placing a single Lumedyne unit to light him, some skeletons and not the glass. There was no significant available light with the blinds down so we put the light on inside the single case at the front just to focus and set up before turning them out again. The flash unit was at an angle of about 70 degrees from the axis of the lens pressed up against the glass on the side of cabinet at a distance of about four feet from the subject at a height of about eight inches above his eyeline.

I had a 28-70mm lens on the Kodak DCS520 camera and it was important at this point to shoot a test frame to see if there were any possible reflections on the glass. There was one small kick from a metal support in the cabinet behind him so I moved the light to about 80 degrees from the axis and the reflection was gone in the second test shot. There are some rules for shooting through glass:

Try not to have the light on the same side of the glass as the camera. If it is, then the light needs to be at least 45 degrees from the lens axis, and preferably a lot more.
Wherever possible the camera needs to be pressed as close to the glass as possible, touching is better.
If you can plan in advance, wear black and carry some black cloth to cover any light coloured objects that might reflect in the glass. Black tape across the maker’s name on the camera may also be a useful precaution.
If there are two or more panes of glass in the picture you must be aware that it is possible to get reflections of one pane in another. Each pane has two surfaces.
Make use of the digital advantage, check the LCD adjust where necessary.
Simple composition, simple lighting setup and a darkened room. All elements that help to eliminate most of the reflections. I would never choose to shoot with this much glass in the image, but needs must…