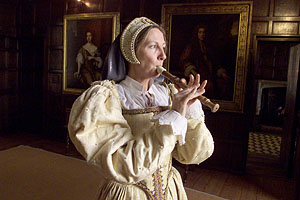 For just over a year I have been writing these “how to do it” columns about the use of flash in my daily news photography. This time the picture I want to talk about was shot with good old fashioned available light. Not only that it was shot using what artists and early photographers loved for their studios – North light.

Sometimes even I think that there isn’t enough time to set up lights. This was a launch event for an English stately home and it’s education programme for children. There were actors playing the parts of major figures in the history of the building and dozens of children were there to enjoy themselves.
Lots of little people running around means that setting your gear up is difficult, the presence of other photographers makes it harder still.

I decided that this actress was the picture and managed to get her in the room without children for a very short time. The weather outside as bright enough, but it was raining steadily and the light coming through the window was really nice.

The light reading four feet (1.2m) from the window at head height was 1/90th of a second at f4 on 200 ISO. Another foot (30cm) back the reading dropped off by over a stop, and back by the same amount it was down by a further two stops.

The light reading going off to the side dropped just as badly, to the extent that the wall you can see behind her is a full four to five stops underexposed. That’s the way that available light works when it’s coming through a window. You have to think of indirect window light as similar to a light modifier such as a softbox or an umbrella and vice versa. The lesson that all photographers can learn from this kind of picture is that there is a lot of sense in observing nature and copying it if you can’t use it.

So when it came to actually shooting the picture, I had metered the area and found my spot where the there was the most light. I put a small scrap of paper tape down and askd the actres to stand on it. I love photographing actors and actresses becuase they know how to stand, how to look and how to be what you ask them to be in a way that even models don’t. She stood on the mark and we shot a variety of images but in this situation it’s important that the subject is facing into the light so I concentrated on that – moving myself rather than her.

With digital cameras the problem of getting the white balance or colour temperature right is nowhere near as acute as when shooting transparency film and my method tends to involve shooting a frame with a white card under exposed by a stop or so in the centre of the frame and then using that as a custom white balance. That’s exactly how I got the colour right in this case. The final exposure was 1/125th of a second at f4.5 on 400 ISO and the lens used was my 17-35 f2.8L lens set at 20mm (36mm equivalent).

In most situations the available light rarely suits the subject. There’s either too much, too little or it’s coming from the wrong direction. Once in a while you cannot beat it, the skill is identifying that one time.