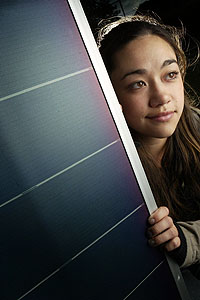 Most photographers take a deep breath and touch wood for good luck when they are aked to shoot pictures with glass in them. The arrival in the world of digital cameras with LCD screens has taken away a lot of the guess work about where and how the reflections of the light and the rest of the world fall.

This portrait of a “young achiever” and a solar panel needed to be shot at a time when there was little or no light around. The British summer oftens throws up days when the available light exposure just doesn’t have enough contrast to make good photographs. The picture editor’s instructions called for some form of drama so I decided to shoot the picture with plenty of refelcted light on the panel itself.

My first reaction was to use a flash with a snooted reflector that gave a spot light feel. I tried a few frames with this set up, but the gradation of the highlight on the panel as well as the harsh shadow on the girl’s face didn’t work and it was time to try plan B.
My Lumedyne flash units always have their diffuser caps over the reflectors while in transit to protect the tubes and plan B is always to shoot with the diffuser in place and no other form of light modifier. The effect was still too harsh, so I was left with the option of using a softer light modifier such as a soft box or an umbrella. My first thought was to go for a soft box, but all of mine are rectangular in shape and I was worried that the light on the solar panel wouldn’t have a the kind of “hot spot” that I wanted.

In the end I decided to use a white “shoot through” translucent umbrella. This had two advantages, a better light quality on the girl’s face and a nicely rounded and graded hot spot on the solar panel.

The daylight, poor and flat though it was, was sufficiently bright to require quite a lot of flash power to overcome it and the grey sky was in danger of being a white blob at the top of the frame. I decided to eliminate virtually all of the ambient light and set the shutter speed at 1/250th of a second.

The high shutter speed allowed me quite a lot of freedom to shoot with whatever aperture the Lumedyne 200 w/s head could give me and I placed the flash head at an angle of about 45 degrees from the axis off the lens at about 10 degrees above the subjects eye level. Shooting through the translucent 40″ (1 metre) umbrella allowed me to place the front of the brolly less than two feet (60cm) from the subject. This gave me a flash aperture of f8 on 200 ISO. The first test shot with this set up highlighted a few improvements.

The first change that I made was to angle the panel a little more towards the camera to give the best reflection and the subtle coloured fringe on the glass. Next I needed to ask my subject to look away from the camera, which somehow helped the composition. There are no hard and fast rules about whether people look into or away from the camera, but in this case the latter worked better.

The penultimate change was to get some light to seperate her black hair from the black underexposed tree lackground. For this I used a Canon 550ex flash unit set to 1/4 power manual exposure and triggered by a second Pocket Wizard receiver. I had a small stand in my bag, so I set the Canon Speedlight about three feet (90cm) behind the subject to get the bold rim light effect.

Finally I wanted the scene to have a warmth that was missing, so I selected the colour temperature white balance and set it to 6200? Kelvin. This gives a subtle warm tone, although owners of cameras without this facility could try using the cloudy day setting. The whole image came together after several minutes worth of messing about and the photograph has a constructed feel to it that suits the situation and the space left for it in the magazine. A few minutes later, it rained. It rained very heavily and for a long time. There is a real sense of satisfaction about getting the shot that you need in conditions that are far from ideal.