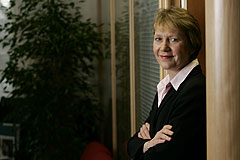 One of the classic lines that you’ll read in most lighting manuals is that “there’s only one sun in the sky”. You cannot argue with that but there are often times when a second light source used with subtlety can really boost an otherwise OK image. This technique example is a bit of a recap on a couple of earlier ones, but I thought that it would make the point about adding a bit of a “kick light” very well. It was a simple and straight forward enough job – ten minute portrait of somebody not very well known outside her own field of expertise and not used to having her picture taken. The room was less than inspiring but had a couple of plants and some windows and so was a more than adequate venue to make a decent portrait.

The top picture was taken first without any lighting other than that on the subject. She was lit with a Lumedyne 200 w/s kit using a shoot through umbrella, triggered by a pair of Pocket Wizard Plus units. There was very little light in the room – the ambient reading was 1/20th of a second at f2.8 on 100 ISO and the light was flat and slightly green.

With the Lumedyne positioned at about sixty degrees from the axis of the lens and two metres (80 inches) on it’s 50 w/s setting the subject needed f5.6 on 100 ISO to expose her accurately. With almost no ambient light figuring on the subject I was able to shoot with the shutter speed at 1/15th of a second just to get some light into the window behind the plant on a dull London winter’s day.

On the back of my camera the plant looked like a dead, dark mass and so I decided to liven it up a little and attached a second Pocket Wizard receiver to a Canon 550ex flash unit set on manual. The 550ex had a Sto-fen omni bounce attached to it and it was pointed from slightly to the side and below up at the plant. I tried it initially on 1/8th power but after a couple of frames I pushed it up to 1/4 power just to add some real difference to the dark green. To add to the lighter feeling I shot the second image at 1/8th of a second to allow even more light from the window to show up as well. If you hadn’t seen the frame below, the top one olooks OK but in my opinion the second frame looks far better when they are seen like this. 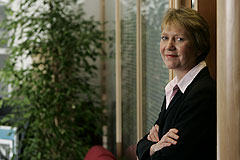 This kind of extra fill light doesn’t even come close to challenging any “rules” about there being only on sun in the sky. Nobody that i showed the picture to could tell where the illumination on the plant had come from – was it another light? Was it just more light from the window?

Having a spare slave unit or another trigger for the Pocket Wizard has helped me out in situations like this a hundred times or more but this is the simplest of illustrations of how it’s done that i can imagine.