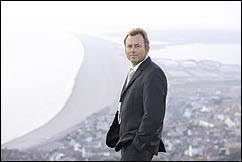 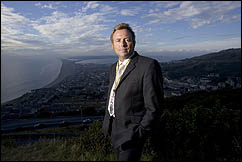 When I was searching for an opening image for a recent “dg28 live” seminar I only had to look back a few days to find this example of exactly WHY WE USE LIGHTS.

Early Autumn on a Friday evening in the UK isn’t often a time when the best opportunities to shoot great pictures present themselves. This one, was a real exception. The subject of the portrait runs an educational organisation that serves a coastal area near where I was born. I should know the area like the back of my hand but I don’t and when my subject suggested that we went up on top of the Isle of Portland (not an island at all, just a peninsula!) I thought that it would make a decent enough backdrop but that the view might be obscured by mist. The two pictures below were taken with different lenses but they were taken within a few seconds of each other and show just how much of a difference a bit of flash can make.

We drove up to the highest point and sure enough, the view was spoiled by some low cloud and mist but the sky through the slight mist had real potential. To get any decent contrast into the scene I knew that I’d have to use quite a bit of light and so I carried my Lumedyne kit from the car to the vantage point that we were going to use. I’m very glad that I did.

The straight available light reading on my subject was 1/250th at f3.5 on 100 ISO and the light was very blue. I shot a couple of frames without flash and they looked a little washed out and flat (see the left hand image above). Although they were not bad photographs, I knew that I wanted better and so I braved the strengthening breeze and got my Lumedyne 200 kit out and set it up without any soft box or umbrella. I left the softening cap over the reflector on the flash head and positioned it about three metres (ten feet) to my left and at an angle of about 45 degrees from the axis of the lens with the flash about ten degrees above the subject’s eyeline.

The next steep as to take a light reading from the sky. This came in at 1/250th at f6.7 on 100 ISO – two stops more than on the subject which meant that a properly exposed sky would mean my subject was two stops under exposed. These are good conditions for the use of flash because a difference of two or more stops means that you can add flash to the foreground without having to worry about too much ambient light affecting the exposure.

I shot my first flash test frame with the Lumedyne set to 100 joules or watt/seconds (half power) and the subjects face was a little bit burned out. I stopped the lens down to f11 and tried again. This time the subject looked just right and the sky was very moody indeed. I shot a range of exposures with the shutter speed set variously from 1/60th of a second through to 1/250th and my favourite when it came to editing was 1/180th. At that setting the sky is about one f-stop underexposed giving it extra mood without losing the contrast that exposing for the sky had given me.

Needless to say, I shot a veriety of poses and angles but a situation like this often offers up one classic opportunity that you know is going to be “the one”.