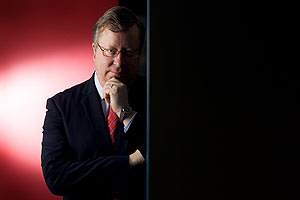 Important people often need to be photographed in a way that makes them look powerful. Some of them even like to be seen looking down at you, which is madness when you consider that 99% of people looking down get two chins! This portrait of the Chief Executive of a government agency was made at their offices in London where I had to wait whilst another photographer shot him first. My picture editor had agreed that we would get access to a flat roof area outside if the weather was good so that we could take advantages of the most famous backdrop that I know: Big Ben.

In true PR person style they had failed to get the key. The weather was superb and whilst we waited for the first photographer and then the key search the sky went from brilliant blue to really dull grey. Plan two. The offices have some brightly painted walls, plenty of glass partitions and quite a lot of space and so I decided to go with this corridor where the far wall is a bright red and the nearer one is sky blue.

Most of my work involves balancing flash with available light in some form. This shot avoids any complications with ambient light by using high powered Lumedyne flash and a shutter speed of 1/250th of a second indoors.
I shoot on 200 ISO wherever I can (there is no quality advantage in using 100 ISO on the EOS1D MKII) and so I positioned my subject with one third of his body in a doorway between two glass cubicles. The wall facing me (the one that shows up as black in the picture) has no light on it at all and the Lumedyne with a Chimera soft box is about 80 degrees from the axis of the lens less than two metres to the right of the subject and about level with his eye line. The flash is, as always these days, triggered by a pair of Pocket Wizards.

My first frame with the flash on 1/8th power (25 joules) with the aperture at f4 (deliberately to get a narrow depth of field) was still overexposed and so I stopped down to f6.7. I had already attached a second Pocket Wizard receiver to a Canon 550ex flash unit set to 1/4 power manual on a bookshelf so that it lit the red wall about ten metres away. It was also overexposing at f4 and so I left it at 1/4 power when I stopped down to f6.7. The red highlight with the Speedlight was pleasant but i decided that I’d like it really cook and moved it a lot closer to the wall. By now the background was overexposing and looking great.

By accident I moved a little to my left and shot a couple of frames that had some flash hitting the sky blue wall that ran at right angles to the access of the lens. The blue stripe that suddenly appeared in the centre of my frame really added to the picture and so by looking at the LCD I had made a positive discovery. Those who advocate ignoring the LCD don’t know what they’re missing!

The other positive effect that an “accident” had given me was that the other photographer had made the subject conscious about his chin and so he placed his hand in front of his neck and added some gravitas to the overall composition. I did shoot some pictures outdoors too, but by then the weather had turned colder and damper.

Like most of the later “technique” pieces on this site, this one goes over old ground (working with layouts, changing your plans and adding atmosphere with colour) and adds the bits together in new ways.