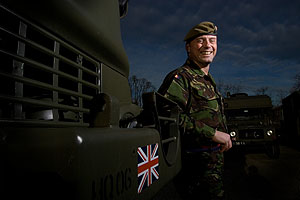 If there is one thing I’d like visitors to this site to take away with them, it’s that they can have quite a lot of influence over light as well as composition. As a professional editorial photographer I have little or no say about the subject matter. This portrait of a young Army officer recently returned from active service was very much intended as a supporting image to those that he had by or of himself in Afghanistan. Never one to accept the supporting role, I wanted my portrait shot in an English barracks to still be the big lead image.

By the time I had driven to the location, got through security and decided where to shoot the picture it was well into the afternoon on a winter day. If the sun is in the right place and you have the right conditions this can be a wonderful time to shoot this kind of picture.

I couldn’t show anything that might give too much away and so we decided that the front of an Army truck with a Military ambulance in the background was pretty safe. My subject wasn’t actually in shadow in this picture but the angle of the sun was throwing my shadow across some of his body. Decided to use my custom Lumedyne head with a 200 joule Signature series pack. No light modifier (no umbrella or soft box) other than a bit of frost filter (thin white paper type material) over the reflector. I placed the flash about three metres from my subject and turned the power up to full. The flash was about sixty degrees from the access of the lens and ten dgerees above his eye line.

I took an available light reading through the lens of 1/250th at f11 to properly expose the sky and so I fired a couple of test frames at 1/250th at f16 aiming to underexpose the sky by a single f-stop.
My initial thought was that his face was a little overexposed and so I shot another test at f22, finally settling on f19 as the correct flash exposure. I shot some pictures with the shutter speed at 1/125th and at 1/180th thinking that this would give me that one stop under sky but my favourite images all have the sky one and a half stops under exposed.

I will always own up to my “flukes”. In this case there is some nice fill on the side of his face away from the flash and this was courtesy of the lorry’s windscreen acting as a reflector.