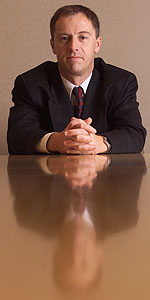 When you arrive at a location to shoot a portrait you have to keep up a converstaion with your subject (or someone who works for them) while deciding how and where to shoot the picture.

When I arrived at the impressive offices of this computer company we quickly agreed to shoot the job in a conference room to avoid my having to go through security. When we got into the room it was full of furniture so I cleared one end and quickly spotted the possibility of using the highly polished table to some effect.

Reflections of one sort or another often give a real element of interest to a picture. The sky mirrored in the lake has long been a staple of the landscape photographer and the mirror has featured in glamour images since Fox Talbot’s time. Polished wood is a great surface for reflections because you get a very different version of the subject.

This shot was the final try to shoot something exciting at the job. I hade been playing with far harsher lighting and hand positions before settling on this very simple composition.

It was lit with a Lumedyne 200 Joule pack and head set on full power with a Chimera 70cm softbox. The centre of the light was at eye level at an angle of 70° from the lens axis. This was metered at f19 at 200 ISO and the shutter speed was set to 1/125th of a second to make sure that no available light crept into the image. A map was removed from the wall to make the picture simpler and the camera was sitting on the surface of the four meter long table. I decided to use as long a lens as the room would allow, which was a 70-200 f2.8L series Canon lens at about 80mm (128mm 35mm equivalent). A very simple shot that works well, and one that is easily repeated/copied/modified as and when the need arises.