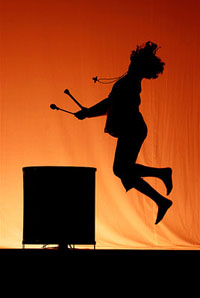 There are many reasons for using a silhouette, and the most common is to preserve the anonymity of the subject. The identity of children is something we are often asked to keep secret – especially if that child has been in trouble with the authorities. This one was done purely for artistic effect…

After well over an hour of trying to shoot a strong lead picture I decided to set this photograph up with one of the young people on this summer school. The hall had a cream coloured background cloth, so I used an orange gel to give it real impact.

1. I started by positioning the drum near the edge of the stage, trying to get as much distance between the girl and the canvas backdrop as possible. I was shooting at the 200mm end of the zoom, which on a DCS520 is equivalent to 320mm.

2. The next thing to do was place the Lumedyne flash head behind the drum on the floor pointing up at the background, with a high sensitivity slave cell to trigger it. I put a piece of orange gel between the reflector and the diffuser cap and set the pack to 100 joules. The kind of gel used in this case is known as an “effects” gel which gives a visually pleasing colour rather than the kind of colour correction gel used for balancing daylight and tungsten.

3. I started out by pointing the head upwards, but checking the spread of light on the LCD screen on my camera I decided to point the head along the ground, giving the graduated light effect up the curtain.

4. I made sure that there was no significant amount of light on the girl, and set the shutter speed to 1/250th to make sure.

5. The background was metered at about f5.6 three feet off of the ground, so to make the mood a bit darker I set the aperture to f8. I used a Canon Speedlite set on 1/128th power to trigger the flash, pointing the reflector away from the subject.

This was the first frame with her jumping and, despite shooting many more frames, I never bettered it. The object around her neck on a chain looks like a crucifix, but it is actually a whistle that flew out of her mouth as she jumped.