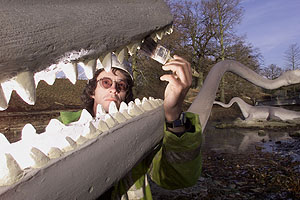 I get a sore throat telling people that flash isn’t just a way of lighting the whole scene. It can, if used properly, pick out a small detail and give it real emphasis. Studio photographers and cinematographers have always known this, so it’s time that us little guys adopt the technique for ourselves. Taking a flash unit off of the camera for the first time is both a frightening and a liberating experience. When that little cartoon lightbulb goes on just above your head you instantly become a better photographer. You might not use the technique, but you know about it and therefore have it as part of your arsenal.
This job was on a sunny but cold beautiful January day. The light levels were pretty high, but the shadows were deep and plentiful. Once anyone was behind anything they were in the dark. Ordinary fill flash would have bleached out the concrete dinosaur’s jaw and thrown an awful shadow accross the restorer’s face.

The exposure for the general scene was a healthy 1/180th of a second at f5.6 on 200 ISO. The face of the restorer in the shadow was four stops down at 1/45th at f2.8 and the inside of the dinosaur’s mouth was nearly as bad.

That kind of exposure difference makes for poor images. This gives the photographer two options…change the composition so that everything is in sunshine or to balance the the background with the important shadow detail using flash.

My first reaction was to get the flash around to the side on a stand and light his face from what was an angle to the axis of the lens of over ninety degrees. I tried it, but his face was over half in shadow and the picture looked wrong on my LCD screen. It struck me that the image would be really lifted by having the inside of the mouth lit and by having the rest of the scene a little bit underexposed – between half a stop and one stop would be perfect.

The trick at this point was to get the light into the dinosaur’s mouth in such a way that it would light everything that we wanted lit, and to avoid burning out any details. I had the choice of using a Canon 550ex flash and triggering it with an ST-E2 trigger or using a Lumedyne flash unit. On this occasion I chose to use a lumedyne head, removed from the lighting stand and placed deep into the mouth. It was set on it’s minimum power output which is 50 joules (50 watt/seconds) and had a diffuser cap in place over the reflector and would be triggered by a Wein slave cell.

The flash was putting out quite a lot of power and gave a flash meter reading of f9.5 in the man’s face and a mighty f16 inside the dinosaur’s already white mouth. I placed some writing paper over the lower half of the flash which meant that the inside of the mouth was still a little bleached, but accpatably so. Given studio conditions and plenty of time I could have overcome this, but news photography is all about making small compromises of this kind. The inside of the mouth was down to f13 – only one stop over the reading on the man’s face. To balance the rest of the scene to f9.5 required a shutter speed of 1/60th of a second so I tried a test shot at that exposure.

The first test shot didn’t give enough emphasis to the foreground so I changed the shutter speed by half a stop to 1/90th and tried another test shot. Finally I decided that the right shutter speed was 1/125th of a second and set about shooting the rest of the job. The image shown above was about the tenth frame with this composition. As usual I tried others, and tried other ideas. This was the picture that was used in the paper, I love it when a plan comes together….