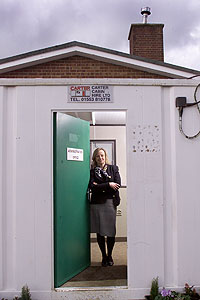 In a very similar vein to last month’s technique page I am going to talk about this portrait of a school head teacher that required a fair bit of messing around to get it right. It seems to me sometimes that the further you get the flash away from the camera, the more interesting the result!

This picture was shot as part of a set about the work of the headteacher of a very small school in rural Cambridgeshire. Her duties are many and various so as well as being the head, she is also a full time class teacher and general fixer. To add to her workload, the school is also being rebuilt and this metal shack doubles as the school office.

When I arrived at the school, the weather was sunny and she was teaching a class so I shot a lot of “fly on the wall” pictures of her teaching and of the kids doing their work. Playtime came and went and I shot more pictures of her interacting with the children, this time at play. What I didn’t have was anything of her role as an administrator and leader so we went to the office to see what we could do.

My instinct was to shoot some of the head with the secretary, so I tried all sorts of ways of doing so but the cramped space just made making good pictures extremely difficult. Then it started to rain so I went outside the room to grab a lighting case that was starting to get wet and as I turned I noticed the possibility for this composition.

Sometimes you just have to take advantage of chance so while she was happy to remain in the warm and dry I got my bags inside (out of sight of course) and positioned a Lumedyne head on a Manfrotto stand with a Wein high sensitivity slave inside the room at an angle of about seventy degrees from the axis of the lens. This was a bit wider than I would have liked, but the flash had to be inside the building to make the picture work and that dictated my angle.

Back outside with a 28-70mm lens on a DCS520 camera the next job was to get a reading for the sky that would show it up as the grey and stormy sky it had become. I metered the sky through the camera at 1/250th at f8, which also left exterior of the white painted metal building about two stops under exposed. I decided that this was fine so I now needed to get the flash inside the room to give an exposure of f8 on the headteacher. I had decided originally to use a umbrella to soften the light from the Lumedyne, but this presented all sorts of space problems inside the cramped office, so I opted for the basic reflector, with a diffuser cap over it and a sheet of “soft spun” lighting diffuser positioned with clips about 5cm (2 inches) in front of that.

I got my old Sekonic L-328 flash meter out and took a reading. With the pack set to 50 joules (50 watts per second) on 200 ISO I was still getting f11. The pack doesn’t go down any further, so the external exposure needed to change to accommodate the new aperture (I hate using neutral density filters unless I have to).

Back outside the rain was falling, so I pulled my hood up and set about shooting a test frame at 1/125th at f11. I was far enough away from the building to be able to use my 28-70 lens at about 50mm and the flash was being triggered by a Wein Infra red flash trigger. The first test frame showed that the sky was a little bit too dark. As the rain had started in earnest the light had dropped by another stop so I went down to 1/60th of a second at f11. This was now working well and I shot quite a few different compositions – variations around the theme with the light inside the building being provided solely by the Lumedyne kit and the light outside varying by a stop or so as the rain came and went. After about twenty frames I was getting quite damp and I was sure that I had the shot. Cowardice and coffee beckoned!!!

In these circumstances you nearly always get into one of those “I never knew there was so much to this photography” conversations and it’s always handy to have one or two ready anecdotes about the lengths you go to to get it right ready and waiting!