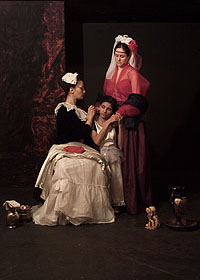 Every once in a while someone throws down a technical gauntlet and I always find myself picking it up. I like the challenge I suppose, and I’m usually waiting for the challenge to be made. On this occasion it came from left field with no real warning, but a challenge is a challenge….

The students at this acting school had been set a project where they were given a painting and had to reconstruct the scene as precisely as they could at the end of a short drama that they had to write which set the scene. A painting done in Spain by an Englishman a long time ago was the challenge that the students had accepted and they showed off their command of drama and Spanish for my journalist colleague and myself with great professionalism.

Unfortunately their command of lighting was less well developed. The few dim lights that there were mimicked the painting to the human eye but meant an exposure of two seconds at f2.8 (400 ISO) with the camera.
Being the kind of photographer who rarely has an assistant I had come without a tripod, so I was forced to light the scene myself. They had a print of the painting so I had to study it very quickly and make a plan. I have written before about reading other people’s work, but I had never had to do that quite so literally with any other job! The composition was their department so I concentrated on the light making mental notes of it’s direction, colour, contrast and intensity.

Painting in this period was usually done in the old “north light” studios (that’s “south light to those in the southern hemisphere) where there was no direct sunshine, just subtle and slightly directional reflected light. It was definitely coming from the left as we look at the scene as the soft shadows were all the same way and the catchlight in the girl’s eye was diffuse and large.

The painting is old and the print showed it to be discoloured in a slightly sepia or maybe nicotined way. To mimic this with flash required some thought and the various straw filters in the bottom of my softbox bag were all too “orange”. A thought came to me about the Sto-fen warm-up filter that I have for my Canon flash guns and it’s colour was as close to what I needed as I could get. The colour, for those of you who haven’t got one, is more golden than orange – perfect! I was going to use a Lumedyne light for the job so I taped the Sto-fen as well as I could into place directly over the flash tube (no modelling light on this head) and set the flash into a Chimera 90cm x 60cm (36×24 inch) softbox. It was important that the light was pretty even across the scene so I moved the box back three metres (ten feet) at a height of about two metres (six foot eight inches) and at an angle of 40 degrees from the lens axis. The contrast was kept low by the colour of the light and it’s evenness as well as leaving the camera set to 400 ISO which helps to give that “old master” quality.

The lens choice was dictated by the painter’s vision when he composed the piece so I guessed at around 60mm in 35mm terms and put my 28-70 f2.8L on my camera, setting it to about 40mm. Another check of the composition, a check with a flash meter, set the lens to f8 and I was ready to shoot. I fired a test frame, decided to open the lens up to f6.7 and checked the scene against the print.

It’s a weird sensation when you know that you have got it right by the third frame! The photographer in me told me to shoot a few more frames “for luck” and the scene was captured with a lot more technology than the artist could ever have dreamed of.

The job also involved a few quick headshots of students and professors as well as a full scale portrait of the principal but the main image made this a very unusual commission, but acted as a great technical exercise.