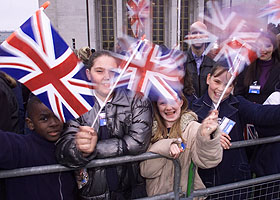 I used to know my way around a press pen at big events, but I haven’t had much practice recently so when this job came up in the diary I was a little less confident about what I was going to get than I normally am.

The protocol that surrounds official visits by presidents, kings and queens around the world is pretty well defined and sufficiently restrictive that good pictures are pretty common, but great ones are rare indeed. I find the crowds and lesser dignitaries far more interesting subjects than the stars of the show because they are far more excited and far more interested in having their pictures taken anyway.

The average child in the United Kingdom might see the Queen once every twenty years, so even if they are from a non-royalist background the chance to witness a visit will inevitably get them pretty excited. This school group were in place ready for the arrival of the Royal party and the weather wasn’t too good. I was drawn to the colour of the small plastic flags that they had been given and as soon as I looked towards them from the press pen they turned around and started waving the flags.

This is a shot that I have done many times over the years, and I expect that the vast majority of news photographers have too. I came in as close as I could with a 17-35 lens and the children waved even harder! The light was poor and the available reading at 400 ISO was a meager 1/125th of a second at f4. Worse still the light was really flat so it was a bit of a “no brainer” to consider using some flash, so I took a 550ex out of my bag and put a Canon ST-E2 speedlight transmitter on the camera. I could have used a cable, but it is a lot less bother to use the infrared.

I only held the flash, with a Sto-fen Omni-bounce, 50cm (20 inches) from the lens, but that was enough to get away from the horrors of direct hot shoe mounted flash. It was difficult to gauge how much blur that the flags would give so I guessed at 1/30th of a second at f8 and shot a couple of frames. It proved to be pretty good, although the LCD screen on the back of my camera didn’t seem to show the actual extent of the blurring. I was thinking to myself “wave those flags faster”, so I set the shutter to a slower speed (1/15th) and stopped down the matching f-stop to f11 and shot a few more frames. The picture that I chose (above) was one of those taken at 1/30th because it proved to be the right amount of blur for the flags because at 1/15th they tended to disappear!

It’s a simple shot, one that gets repeated the world over many times a day. Every time I try it, I do it differently. When there is plenty of light it’s sometimes possible to absolutely freeze the flags which gives a wholly different feel. This just goes to show that there are so many variables in photography that you can’t tell somebody how to do a particular shot, you can just tell them how you did something yourself and hope that they get some some inspiration to do something similar and to do it their way.