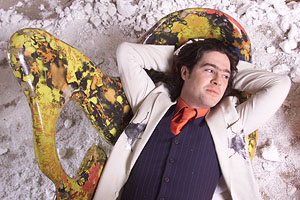 If you ever get the chance to photograph an artist with their work I hope that they are as much fun and as cooperative as Finn Stone. Shooting somebody who is themselves aware of the subtlety of visual imagery means that you can reason with them, explain what you are doing hopefully carry them with you.

I have written on this website and elsewhere about how important it is to formulate your ideas about a portrait before you arrive and to refine/change those ideas very shortly after getting there. The small industrial unit that doubles as this artists studio was covered with bits of crumbled polystyrene (Styrofoam), shreds of fibre glass and paint. The presence of these creates a difficult environment for sensitive camera equipment so it was important to keep everything as far away from them (especially the highly static polystyrene crumbs) as possible.

This photograph was the second idea that I tried during the three quarters of an hour that I spent photographing him. The first was to use the various bits of furniture and sculpture to look through at him and having successfully bagged a selection of images I moved onto this idea.

I wanted to get him sitting on one of his chairs, and this futuristic chaise longues was the perfect candidate with it’s amazing colours. The small bits of polystyrene that I first identified as my enemy suddenly became a really interesting background when I looked down at the chair so I got my artist to keep his white tuxedo jacket on and to lie down on this chair.

Every workshop seems to have a small step ladder, and this one was no different so I borrowed it which allowed me to make sure that I wasn’t shooting with an extreme wide angle lens. There were two reasons for avoiding the widest lenses;

avoiding wide angle distortion, which in this kind of picture would be unpleasant
making sure that I could light the scene without any fears of my own shadow getting in the way.
A quick clamber up the ladder with a 28-70 f2.8 lens on my camera reassured me that I could get the composition that I wanted and I turned my attention to the lighting. During the first few pictures that I had shot I had learned that Finn was a lot more comfortable looking away from the camera than straight into it. This gave me the idea of setting the main lightsource off to one side, always a good idea when you want plenty of modeling in the finer details. I decided to use a single Lumedyne 200 joule unit with a 90cm x 60cm (36″x24″) double skinned softbox and I set the centre of it at a height of 60cm (24″) from the ground at right angle to the subject. This instantly created a good range of shadows, but they were slightly too harsh.

By this time I had decided to shoot at f11 on 200 ISO and that meant the softbox was quite close at about 1.2 metres (4 feet). The shadows needed to be filled and a big sheet of polystyrene in his studio placed just out of shot, opposite the main light did the job perfectly. Big still life and fashion studios use these sheets all of the time as reflectors and having one there meant that I didn’t have to go back to my car to fetch one of my folding reflectors.

I got my subject to look directly at the centre of the softbox and the whole shot came together really well. It pays to keep talking to your subject and by amusing him with my awful jokes I got the right expression on his face. The final chosen image was shot with the lens set to 35mm (57mm after 1.6x lens/chip effect) at f11 and 1/60th of a second. There was no ambient light involved in the final image, just a single Lumedyne and a single, large, reflector.