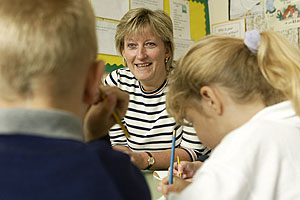 I have always been keen on using light in my work as a news photographer, and I have preferred using my Lumedyne kit for a few years now. Having changed over to the EOS1D last month, and being keen on doing things in different ways I have been playing a lot this month with lighting my work with one or more Canon speedlite.

I don’t want to completely alienate the many Nikon users that regularly read these technique pieces, but this example will drift into being a bit Canon specific from time to time. Sorry about that, and I hope that Nikon bring out the kind of kit that allows you to do all of this really soon!

At this time of year I spend a huge amount of my working day in schools – even more than I normally do – and the light in some of them is actually pretty good so it is occasionally possible to get away with the available light or with a small amount of camera mounted fill flash. Unfortunately, the way that I compose a lot of pictures means that on-camera flash is a real nonstarter so I have been experimenting with using Canon 550ex speedlites on Manfrotto stands and triggering them with an ST-E2 transmitter.

Some of the images have been made with E-TTL and some with manual flash, but all of them with a lot of thought and quite a lot of available light in the mix. This picture of a classroom teaching assistant is a very good example of this technique. The available light reading was a respectable 1/90th of a second at f4 at 400 ISO, but the quality of the light was what we call colloquially “toppy”, ie it was all coming from the ceiling and left everybody’s eyes in shadow and was decidedly unpleasant.

I put a single 550ex on a lighting stand extended so that it was about level with the lady’s eyes. I put a white Sto-fen Omni-bounce on the flash and pointed the flash straight up while powering it with a Quantum Turbo battery to make sure that the recycle times weren’t too bad. I set the flash off to the left of me so that it was pointing between two children and it ended up at about 30 degrees to the left of the axis of the lens in the frame above. I was able to move around quite a bit without having to move the speedlite whilst using a 28-70 f2.8L lens.

The first frame was just to see if the E-TTL was going to cope with the situation and with the flash metering set to follow the focusing point it was spot on from the start. The quality of the light using this method was surprisingly real, which surprised me because when I have used a similar setup with other cameras I have noticed unfortunate shadows unless I metered the flash manually. So far I believe that the flash metering on the EOS1D is as accurate as anything I have ever used, far from foolproof – but very good. This was fill flash at it’s best, removing the unwanted without being easily detected itself.