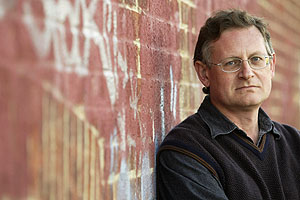 Encouraged by my efforts with the fill flash on the previous page made me try a more subtle version with this portrait.

The location was by a graffiti covered building on the banks of the River Thames where the light was very dull and lifeless. I decided that a 550ex with an Omni-bounce was the way to go again and with the flash at about 80 degrees from the axis of the lens, pointing nearly straight up and at the subjects eye level.

The set up was pretty similar to the previous one, but this time the E-TTL didn’t give particularly consistent exposures so I set the flash to 1/2 power manual. The available light exposure was 1/125th of a second at f4 on 200 ISO and I was keen to keep the depth of field pretty small.

I tried a couple of frames with the flash one metre (40 inches) from the subject and the exposure was still a little hot. Rather than change the power output on the speedlite, I moved the stand back about 30 cm (12 inches) and tried again.

This time the flash output and the available light were balanced very well and I shot a range of compositions with both my 28-70 f2.8L lens and (as above) with my 70-200 f2.8L. I don’t have any explanation as to why the E-TTL worked with one image and not with the other, but it is all pert of the learning curve and I will store the information away in my mind until the “lightbulb” moment comes and I work out just when and where to go for E-TTL and when to go for manual flash.

Again the Quantum turbo came into it’s own, the thought of shooting this kind of job and being able to shoot only two frames before having to wait up to eight seconds for the AA batteries to catch up fills me with dread!