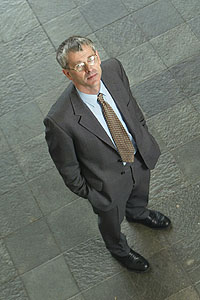 One of the simplest techniques that I use is to shoot a portrait from above. The temptation with this kind of shot is to use a very wide angle lens and a small step ladder, but the combined risks of your own feet straying into the composition and achieving ugly distortion mean that I prefer to save the technique for times when I can get a lot higher up. Environmental portraiture does exactly what it says – it portrays people in their environment and uses the clues from the surroundings to say something about the subject. Sometimes you need to come in closer, to concentrate on the subject’s face with no distractions. This need can often be dictated to you by the lack of a suitable environment, the background occasionally offers up few clues and many distractions.

I have written before on this site about the usefulness of the floor as a clean background. The head teacher in this image runs one of the biggest and poorest schools in east London, but the main building is relatively new and offered up some good backdrops. I shot pictures in a range of different areas, but this slate floor gave me what I was looking for.

This was the fourth and final way that I tried to shoot the portrait and the uniformity of the grey slate floor gave me a very simple option. The school has a walkway about 4.5 metres (15 feet) above the main entrance and we waited until the pupils were in lessons before setting up the shot.

I was using a new Lumedyne “Signature” series flash unit for this job and I set up the flash at the maximum height that the stand would allow which is about 2.4 metres (8 feet) from the ground. The flash pack was attached to the base of the stand to help with making the set up stable with a 1 metre (40″) white umbrella softening the light. The available light reading on the floor was a respectable 1/60th at f4 on 200 ISO, but the light was mainly coming from behind the subject and the reading on his face was just over two stops darker. That meant that I had the relatively simple task of balancing the flash light on his face with the ambient reading on his back and on the flooring.

I placed the flash at an angle of just over thirty degrees from the axis of the lens to my right hand side and took a flash reading. On 200 ISO the flash was putting out f4.5 on 200 joules (200 w/s) from a range of about three metres so I decided to go with that. I had a Pocket Wizard Plus receiver on the flash and I ran back upstairs where I had a 70-200 f2.8L lens on my camera as well as a Pocket Wizard transmitter. Sometimes working alone is bliss, at other times it’s a pain. I shot a few test frames and realest that I needed to move the flash further around to my right to an angle of around forty-five degrees from the axis of the lens, so I had to run down the stairs and move it myself and then back up to the walkway to carry on shooting.

I had visualised this as a vertical frame, and I was shooting with a focal length of just over 120mm with a combined exposure of 1/45th of a second at f4.5 on 200 ISO. I quickly shot a few good photographs at all sorts of angles and decided to shoot a few horizontal frames as well. The 70mm end of the focal range of that lens wasn’t quite wide enough to get the subject’s full height in, so I went over to my 24-70f2.8L lens and shot the photograph above at 60mm. The tiled floor made it difficult to square the composition up, and this frame had to be rotated by one degreee in Photoshop to make it perfectly straight. This image is also an example of allowing space to run text over. The virtually uniform grey of the floor allowed a graphic designer to reverse white copy out of it, which is something that they often like to do. As a photographer, if you can give designers more options without shooting sub-standard pictures, you will always be popular!