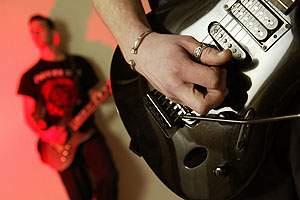 We have discussed the use of background colour in news images and this is another example of the selective use of an accent colour. This time the mood required is a bit of “rock and roll”, at a music college on the south coast of England.

The brief was simple, we needed a generic image of modern music that was reasonably graphic in it’s composition. The facilities at the college consisted of rehearsal rooms and recording studios but the only space available was the corridor between the various areas. Of all the instruments available, this guitar was the most photogenic and it’s owner’s hands were just right for the picture.

I tried the simple composition of a close up with the hand and strings, but it needed something else in the background to suggest the rock music element. The second guitarist out of focus in the background made the composition slightly more interesting, but the black clothing, black guitars and white walls left the image lacking in colour. Having a second lightsource for this kind of job is essential. I had decided to use a Lumedyne head, bounced off of a white wall as the main light – giving an even spread of light on the guitar and guitarist in the foreground. A second Lumedyne on the background with a red filter over the head was placed to give the colour and a shadow on the out of focus guitarist in the background, but the main light was spilling onto the background diluting the impact of the red filter.

I needed to screen the student in the background so that little or no light from the main light was hitting him. I had a spare lighting stand and a monopod to hand so I used my extra large black fleece jacket as a screen. By feeding the extended monopod through the arms of the jacket I suddenly had a large black “flag”. By fixing this in a “T” shape to the lighting stand I had created a very good method of screening the guitarist in the background from the main light. When I tried a test shot with the screen in place, the intensity of the red filtered light was exactly what I wanted.

The main light gave me a flash exposure of f5.6 on the foreground and the ambient light was sufficiently dim that by using a shutter speed of 1/125th of a second it didn’t feature in the overall exposure at all. Balancing the two flash exposures was a matter of metering the two and adjusting the output accordingly. The main light was putting out 100 joules (100 w/s), and was at an angle of 45 degrees from the axis of the lens bounced off of a white wall. The background light was outputting 50 joules (50 w/s) through a diffuser and a narrow cut red filter.

The background flash was screened from the foreground by the same jacket as the foreground flash was screened from the background guitarist. This was something of a compromise, if I had two jackets, two monopods and two spare light stands I would have arranged the lights differently – but that’s the challenge of location photography. It’s all about making compromises that allow you to do the best work in the time allowed and with the resources at your disposal.