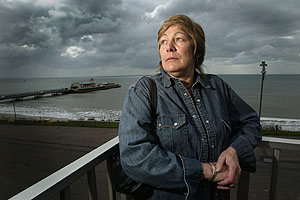 Having failed to post any new technique pages for a few months now I hope to catch up with a series of new ones. This picture was taken at a delegate conference, on a wild and wet day when my lights were busy in the main auditorium. The subject of the portrait was only available for a few minutes.

The journalist that I was working with came to me and said that we needed a portrait of a woman who had been physically bullied in her job and who had managed to obtain a financial settlement with her trades union’s help. There were three photographers waiting to shoot her picture and I was the last to arrive and so had to go third.

The sky was calling out to be used as a background in the same way that I have outlined many times before. The difficulty this time was that I only had a Canon Speedlight to hand and not my usual Lumedyne heads and packs. My bag always contains a Canon ST-E2 transmitter so I used that to trigger my slightly off camera 550ex. The normal first thing to do in this situation is to get your subject to relax, but in this case I didn’t want her to look relaxed.

I moved her back into a junction of the railings and by using a wide angle (16-35 f2.8) lens I added to her discomfort by being a large barrier between her and her lawyer. I don’t make a habit of doing this kind of thing and, to be honest, I probably didn’t need to do it in this case either because my subject was acutely aware of how she needed to come across for maximum effect.

I took an ambient light reading from the sky which was 1/250th at f5.6 and so I set the exposure at one f stop below that on 1/250th at f8. The ambient reading on my subject was far lower and so the flash was going to be the major part of the exposure on her. In this kind of situation I usually set the flash to manual output and I went with 1/4 power to fire a test frame. The 550ex had a white Sto-fen Omni-bounce over it and the flash was pointing straight at her. I held the flash in my left hand at arms length and asked my subject to look at the flash rather than into the lens. One benefit of getting her looking away from me was to give her a look of wishful vulnerability but the main reason was to make sure that she didn’t look down at me as I was below her eyeline. Getting your subject looking down at you presents a whole raft of problems, not the least of which is that she will look as if she had gained a few pounds or kilograms!

The first test frame showed the sky looking absolutely as I wanted it but with the subject about one f-stop too dark. I wasn’t using a high voltage battery pack and so I was reluctant to increase the power of the flash. One of the great advantages of the EOS1D is that the flash will synch’ at 1/500th so I changed the exposure to 1/500th at f5.6 and shot another test frame. The exposure was now fine and my final adjustment was to switch the white balance from the flash preset to a Kelvin measure of 6000é to add some warmth to the picture.

As always I shot as wide a variety of pictures as I had time for, but my first idea was always going to be the best photograph. Sometimes the restrictions of time and a lack of equipment mean that you have to be creative and this image, I hope, proves that.