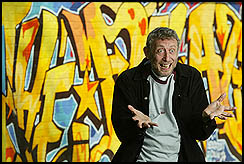 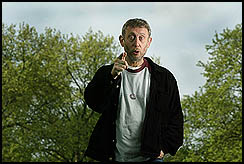 The newspapers and magazines that I work for have a number of regular “slots” – sections with a strict formula to the photographs. The “My Best Teacher” slot is probably the longest running, most strictly controlled and, oddly, the best to work for. The formula is very simple; it’s a large image, always landscape format, running across a double page with the gutter about 1/3 of the way from the left.

This set of portraits were made of a journalist, broadcaster and author who is hero to children throughout the United Kingdom and scar’s the world. I had photographed him before and so I was determined to shoot a fun portrait. He was determined not be photographed in his home and I was delighted when it was suggested that we went to a local park.

The park is a large area of grassland and a disused swimming pool surrounded by a lot of housing. I wanted to have at least three choices of picture that fitted in with the format of the article and so I took two cameras, three lenses and a battery powered flash system – my “normal kit”!

We started by walking from the car to the disused swimming pool. The walls of the changing area had been beautifully and recently covered in graffiti and the sun was shining on the fresh paint. The area from three metres to five metres in front of the wall was in deep shadow from the abundant trees. I decided to stand my subject in the shade and light him with my Lumedyne flash unit and a softbox. Recently I have been using an umbrella box, but this time I was using a 36″x24″ Chimera soft box mounted on my new “custom” Lumedyne head. I placed the flash at an angle of forty five degrees from the axis of the lens, level with my subject’s eyeline on full power (200 watt seconds) at a distance from only six feet from my subject.

The reading on the background was 1/500th of a second at f8 on 200 ISO and so I needed the flash to put out enough power to give me a reading of f8. With the flash in the original position that I placed it I was only getting f5.6 and so I had to move the flash closer to my subject and at just about four feet I was getting the f8 aperture that I wanted.

I chose to shoot on a 70-200 f2.8L lens and so was able to work from a respectable distance. The useful effects of this were two fold. Firstly I achieved a foreshortening of the perspective and secondly I was able to reduce the unwanted effect of having a subject who is over six inches taller than me. He is a very demonstrative person who really performs when giving readings of his, and other people’s work. I decided to get his to talk to me, to trees and imaginary passers by so that I would get some of his gestures and expressions. This worked very well in the image shown here above left, although I did shoot some straight portraits too.

Next, we moved into the avenue of trees. The sun had gone behind some light clouds and the sky was no longer the deep blue that it had been. I still wanted to use the sky as part of the background and the reading off of the sky was 1/500th of a second at f8 – exactly the same as the graffiti covered wall in the first set of pictures. I set the flash up at the same distance as the first shot, but decided to move it further around the side of the subject’s face. This was an angle of about 55 degrees from the axis of the lens and I got him to go through another series of expressions and we were both having a lot of fun. I stayed on the 70-200 lens because it was working really well with the large amount of space that we had to play with.

My subject presents a BBC Radio 4 show about words called “Word of Mouth” and we discussed some of the more unusual words and phrases used by photographers. We both noticed just how much CHIMPING I was doing!

Finally we switched the angle so that he was looking around a tree at me. I decided that his hand gestures needed to feature even more in the photographs and so I composed the pictures a bit tighter than I had been doing. The flash was moved closer and turned down to 1/4 power (50 watt/seconds) which gave me an aperture of f5.6 on 200 ISO. I wanted the green of the grass behind him to show up well and so I decided to underexpose it by about one f stop. This meant an ambient light reading of 1/125th of a second at f5.6, and I shot a few frames with this reading. The grass was too dark and so I settled for 1/60th of a second at f5.6 and I switched on the Image Stablisation on the lens to avoid any danger of blur where the background exposure could impinge on the flash exposure. I shot a range of gestures and some fairly straight images before we packed up and headed off. We had been taking pictures for about three quarters of an hour, all lit with a Lumedyne flash and Chimera softbox.

The result of the session was a set of portraits that really conveyed the subject’s character, that fitted the “slot” perfectly and that I really enjoyed taking.