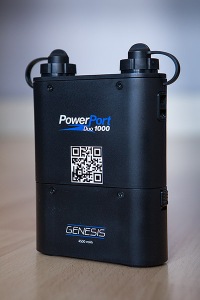 When my old Quantum Turbo Z battery died a few weeks ago I was a little bit annoyed. I hadn’t used it that much and I wasn’t that happy about getting another one. I had read several reviews of a battery pack available in the UK under several different brand names including Godox and Lencarta and I decided to investigate. The unit was available at a really good price from Calumet under their Genesis brand and as a member of The BPPA I was able to get a decent discount from the already low price of £125.00 inc VAT. At that price I thought that it was worth a shot and so I extravagantly rang Calumet from Paris where I was working at the time and got them to send the pack and a single Canon Speedlite cable so that my Genesis PowerPort Duo 1000 would be there waiting for me when I got home.

My first reaction was that it was a lot lighter than the Quantum, roughly the same size in terms of bulk and had two ports. It didn’t appear to be quite as well made and the covers on the two ports were feeling more than a little “plasticky” when I had a look at them. I’m never rough with my gear and so this isn’t always a problem so I stuck the battery on charge ready for a job the following day which was going to involve quite a bit of bounced flash.

It charged really quickly (to be fair, it arrived at 2/3rds full anyway) and I gave it a few tests just to make sure that it was functioning and that my decision to not bother reading the instructions wasn’t a huge mistake. All seemed well and it was recycling a Canon 580exII on full power output in a fraction over a second – every bit as quick as my Quantum Turbo Z.

I shot the job the next day and it performed flawlessly. Every frame was lit and the Speedlite didn’t get remotely warm (a danger with the Turbo Z). My investment was looking to be a decent one. There was another photographer on the job with a differently branded version of the same battery and he had a short cable that allowed you to charge any USB chargeable device from the pack. I had a play, it worked and I ordered one using Amazon Prime on my phone there and then.

That was all about three weeks ago and, as luck would have it, I’ve needed to use the battery a few times since and each time it has performed really well. I’ve topped up my iPhone using it too. To be honest, this battery is so light that it gets put into my bag where the Quantum probably wouldn’t have been. To sum up, when compared to the Quantum Turbo that I had been using it is:

This appears to be one of the great photo-bargains. I’ll let you know if it fails to pass the durability test over the next twelve months – which is the only potential fly in the ointment. That’s why I went for the Calumet branded one – they have shops where I can go and take it back if it does fail.