Much has been written about the shared fetish of professional photographers for equipment and their passion for finding the ever elusive perfect camera bag. We all know that its a myth, yet we all keep on plugging away buying new bag after new bag in the hope that we will somehow stumble upon THE ONE – the bag that is lightweight but protective, small but takes a huge amount of kit, good looking without attracting the wrong kind of attention. Recently I was offered the chance to try out an interesting new bag without laying out the cash first… 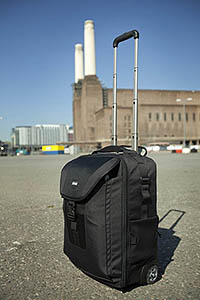 I had responded to a blog posting on another photographer’s website about bags, back pain and my lack of experience with either rucksack or rolling bags when I got an email from the Think Tank team offering me the chance to try out their Airport Take Off which has wheels and back pack straps. I have looked at the Think Tank gear many times since it came onto the market and, to be honest, the only thing that has stopped me investing in one was failing to decide between back pack and rolling models.

These bags come with a curiously compelling life size poster of a couple of sample layouts of gear. One side shows some Canon kit packed into the main compartment and the other shows a set of very impressive Nikon gear. I spent almost two hours packing and re-packing my Canon gear until I was happy and I was amused that my configuration was nothing like either of the two samples. That doesn’t matter the “serving suggestion” poster helped me to work out my own system a lot quicker that I would otherwise have done – it’s only a detail, but its a nice touch.

The following day I went off for the very first time as a photographer with a rolling bag. The job was at London’s Battersea Power Station and it was the launch of a new video game called DiRT3 and the pictures were going to be of a couple of top class drivers doing some fast action slides, drifts and turns around the place. It was a very hot day (well, by London in April standards) and the amount of dust that the event promised to create was going to test everything.

There were photographers and film crews everywhere and, as an aside, I have never seen so many Canon DSLRs in one place being used to shoot video.

The 200 metre walk from the car park to the press area was easy enough and I started to work from the bag. I had 3 camera bodies, 4 lenses, 2 flash units, a MacBook Pro laptop and all of the bits and pieces that you would imagine needed packed into the bag and I found it surprisingly easy to work with the bag and a belt pack. I kept the Think Tank zipped up when I wasn’t accessing it and my prediction of much dust came true. There was not a speck of dust in the bag after an hour so I didn’t bother using the rain cover, which I would have done if I had been worried about dust getting in.

I was at the job for well over 8 hours and my back didn’t complain once. I was editing in the shade of a Ford tent quite a lot of the time and I even used the Airport Take Off as a seat for a while. To cut a very long story short, the bag passed the test with flying colours and it worked superbly well as a rolling bag on day one.

Day two was a shoot on a beach so sand rather than dust was one issue and the need to use the bag as a back pack rather than relying on the wheels was the other. It was a reasonably straightforward portrait and the bag again performed very well. I was dipping in and out a lot more on this shoot and keeping the bag zipped up wasn’t really possible. I would have used a top opening shoulder bag for this shoot in the past and, on balance, the top opening bag would have been easier to work out of. This is the compromise. This bag is easy to carry, easier to roll and in terms of getting to and from the job is far and away the best bag that I have ever used. On the first job where I was working with cameras over shoulders all day I didn’t miss the traditional bag style but on job two I did miss it a little.

I’m still deciding whether the ease of transportation outweighs the slight inconvenience of working from the bag and I suspect that the answer will be that it depends on what I’m doing that day. On the two other occasions that I used the Airport Take Off with camera gear in it the ease of transportation won rather easily, so it was 3-1 to the Think Tank rolling back pack. 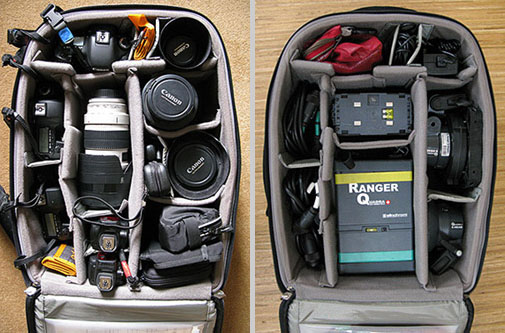 I think that by this stage I had made my mind up that the Airport Take Off is a great bag for carrying camera gear so I decided to see what it was like with my standard lighting kit in it. That consists of an Elinchrom Ranger Quadra pack, two heads, spare battery, triggers, charger, cables and various accessories. The bag swallowed the kit with plenty of room to spare and I almost managed to fit a second Quadra pack in too. With two packs it was heavy and, to be truthful, I rarely work with two packs anyway. This configuration is SUPERB. From the first minute of the first day I knew that I had found a new way to carry my lighting kit. It packs in easily, you can get it out quickly and the system that Think Tank supply for attaching a tripod doubles very well as a way of attaching a stand bag with two Manfrotto medium weight stands and a good sized soft box – and that’s without using the front pocket which is designed for a laptop.

Yesterday I went out with the bag fully loaded with lighting kit, with my MacBook Pro in the front pocket and a Domke J3 camera bag with two bodies, two lenses and a Speedlight resting on top as I rolled the bag to my destination. I can see that this is how I’m going to roll from now on (apologies for the pun) for a big percentage of my jobs.

I haven’t had the bag for long enough to have tested its durability. There are a few bits that I will be watching such as the folding handle and the plastic pouches on the inside of the lid (which now hold AA batteries, a flash meter and plenty of coloured gels). The handle is a miracle of engineering but I worry that it may not be as durable as the rest of the bag. Having said this, and knowing that the people behind the company are working photographers, I’m not put off at all. A little over a week in and I’m as happy as I have ever been with a bag – the fact that I’m likely to use it for a purpose that I hadn’t intended is a mere side issue!