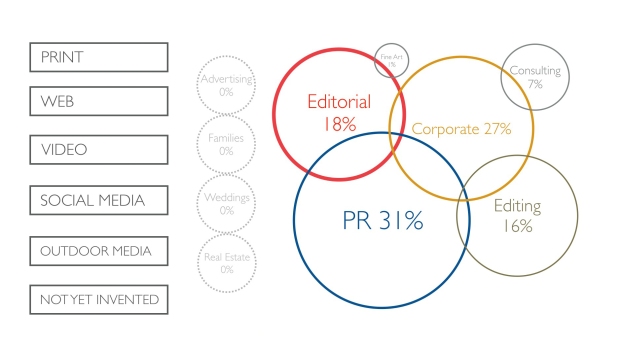 A graphical breakdown of the types of work that I do these days and where the images end up.

I do quite a few talks and lectures throughout the year and I don’t normally discuss the specifics here on the blog because they are rarely open to a general paying audience. This one is different. The National Union of Journalists here in the United Kingdom invited me to run a couple of one hour workshops at a very interesting event they are running in London this Saturday. Titled “The Photographers’ Summit 2017” the day includes the following:

The good news is that you don’t have to be a member of the NUJ to attend and it looks likely to be an interesting day.

My part in the proceedings is to do two identical one hour sessions which I have given the working title of “Making a living with the skill set of a press photographer”. OK, so it isn’t particularly catchy but it does sum up what I’ve been tasked with delivering. What I am trying to do is to say to people with press photography skills that they can take those skills and use them elsewhere within the wider photography industry given that the market for news pictures has been shrinking and changing for many years and given that the world still has a massive appetite for photographs. We’ve all had to accept that a relatively small percentage of those pictures come from professionals but it is my contention that as we reach saturation point for the quantity of images the only place to do go is to do something about the quality. Press photographers have the skills to be part of that change and we just need to do something about applying those transferable skills to the task.

As a quick preview of what I’m saying I have done an updated pie chart (yes, there will be pie charts) based on the one that I did for this blog a few years ago when I wrote about where the work comes from. The changes aren’t too big but it’s worth going back and reading the original article to see how this chart came about.

Now these are only two of the 20+ slides that I am currently planning to use and for the whole explanation there’s no substitute for being there. These are only a one hour sessions (I’m doing the same one twice) and the material that I have had to condense down normally takes about twenty hours to deliver. Ours is a complex business and it would be childish to promise to distill the last eight and a half years worth of freelance business experience down into a few catchy subtitles but I have had a go, so my talk will feature the following in reverse order;

Christmas is long gone and so there won’t be any partridges in any pear trees (at least in my sessions) and if any Lords turn up they will be asked to restrict their leaping to the breaks. I’m hoping that the whole day will be both fun and informative and that we’ll all get a chance to do some serious networking in the breaks.

If you are interested, there were still a few tickets available at a cost of £35 each for non-members and £15 each for members.