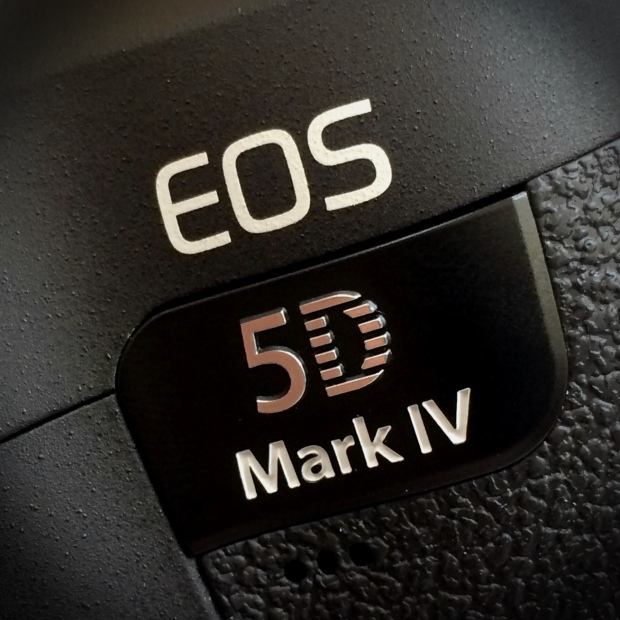 When Canon announced that they had added a wifi capability to the new EOS5D Mark IV I was simultaneously surprised, delighted and apprehensive – emotions which have in turn given way to a sense of relief. Wifi was a feature that many photographers had asked manufacturers to implement over a number of years and we had always been told that there were technical reasons why it couldn’t be done and that most buyers simply didn’t want it. The rise in popularity of limited wifi in consumer and ‘prosumer’ models told a different story and Canon did the right thing by including it in this latest release.

The surprise element came because very few of the rumours that preceded the announcement of the Mark IV mentioned wifi at all. A lot of those people awaiting the new camera had resigned themselves to another generation of cameras with bolt-on accessories to handle rapid image transmission.

The delight was that I was looking at finally getting cameras that could not only talk to a smart phone or a computer in the way that the Canon EOS 6D already could but to be able to send pictures using File Transfer Protocol (FTP) which is what the majority my clients want and need without the cumbersome WFT units or the increasingly flaky Eye-Fi cards.

The sense of apprehension was that I was worried that Canon would have done half a job and implemented a solution that didn’t do everything that I wanted and needed it to do.

Having had the camera in my hands for five days now I can finally talk about my sense of relief. It works.

Not only that but it works really well.

Over the last few days I have done some unscientific but real-world testing of the wifi built into the EOS5D Mark IV and compared it to the EOS5D Mark III and EOS7D Mark II both using the WFT-E7 transmitters that have been am almost permanent feature in my working life for the last couple of years. Put simply and in ‘normal’ use the FTP transmissions from the Mark IV are as quick and as reliable as the older cameras with their £600 bolt-on transmitters. Setting up FTP on the Mark IV is in many ways a lot quicker thanks to the excellent touch-screen option on the camera and getting the wireless operating from getting the camera out of the bag is way quicker.

One of my big fears with the new set up – based on various manufacturers telling us that metal bodied cameras might block the signals too much – was that the range of the transmitter would be too short and so I went to a place where there would be a lot of wifi congestion and ‘pollution’ to test it out. Coffee shops in busy shopping centres have loads of wireless traffic at lunchtime – especially when the students roll in and so I went to one with no fewer than twenty-three different wireless signals and I set the cameras to transmit over my own Netgear 4G mifi unit.

With the mifi in my pocket and the camera in my hands, there was no discernible difference in signal or time sent to send images between the Mark IV and the WFT-e7 equipped 7D MkII whereas the 5D Mark III was a little slower as always which I have always chalked up to the slower USB connection to the transmitter.

I tried the same test connecting each camera to my Apple iPhone both using it as a personal hotspot and to transfer pictures to the phone in the direct mode and, again, there was no real difference that I could see.

When I got back home I tried to see what the maximum range was to get a good signal between camera and 4G mifi and here I found a difference. The Mark IV range was completely effective up to about 2.5 metres whereas the 5D Mark III with the WFT-E7 was around 4 metres. The plastic top plate on the EOS6D was supposedly there to allow greater wifi range and in my admittedly un-scientific tests it appears that you do get a little more range.

At this point it might be worth remembering that the Mark IV is fully compatible with the WFT-E7 (as long as you update the firmware in the transmitter) should you need the extra capabilities – which include greater range, more preset FTP channels and the built-in Ethernet. All of that, when added to the WFT-E7 having it’s own LP-E6 battery, make it worth considering having the separate transmitter for those odd occasions when you need them. I already own three of them and so will definitely be keeping one or two for those very eventualities.

Having conducted all of the mobile testing with a three year old iPhone 5S I took delivery of an iPhone 7 part way through the week and the speed with which connections are made and images transferred with the new phone is dramatically better which is worth keeping in mind if your work involves transferring pictures to the phone and/or controlling the camera through Canon’s smartphone app. 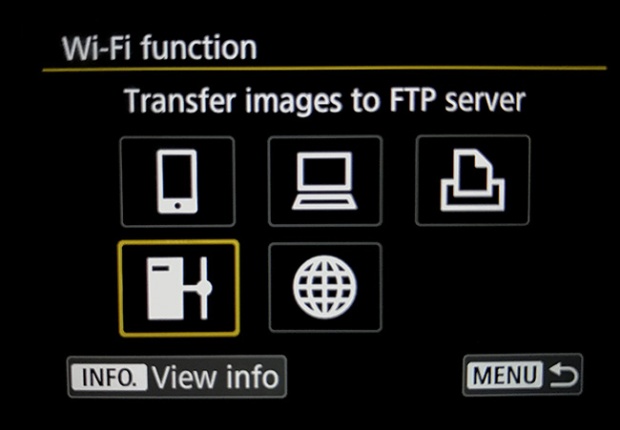 Close up of the main menu screen that allows you to choose which wifi function you want.

Exactly how you set your system up for rapid transfer of images from the camera over wifi can make quite a bit of difference to how it performs. Most of my quick transmissions are for various corporate and editorial clients to get my pictures onto their social media and web platforms almost as quickly as they can when shooting pictures on their own smart phones. For that they need medium sized JPEGs at best and so I tend to set my cameras up to write the RAW files to the Compact Flash card and medium size/quality JPEGs to the SD card and then transmit only the JPEG with basic IPTC metadata attached.

Whilst most of my usage for the wifi built into this camera will be based around various FTP servers I will be using the direct transfer to smartphone, tablet and computer options a fair bit too. I’ve had a fair bit of experience with Canon’s apps over the last few years and I’ve decided that the best way to use the phone and tablet apps is to set the apps up to display images based on their rating rather than having to scroll through hundreds of images on a phone screen to find the right one. By using the ‘Rate” button on the camera to add a single star to selected pictures I can shortcut the whole searching on the phone process greatly. When I review the pictures on the camera’s LCD screen (and the screen on the Mark IV is beautiful by the way) I can use the rate button to tag them as I go through. Once connected to the phone those tagged images are right there at the top of the page saving me loads of time. I find that I only need one-star or no-star options to make this work really well too.

I discussed the idea of getting images away quickly on a blog post last year https://neilturnerphotographer.co.uk/2015/08/24/getting-pictures-away-quickly/ and having the Mark IV just adds to my choices. It takes the WFT-E7 if I need the extra features and it accepts Eye-Fi cards although I don’t see any need for them any more.

There are already dozens of reviews talking about image quality, video capabilities, auto-focus, speed of use and the new button on the back of the camera and I’m not going to add to those except to say that in another blog post I described the Canon EOS5D Mark III as the best camera that I have ever used for the work that I do. That statement is no longer true. The Canon EOS5D Mark IV has superseded it in every way that I can think of.