I’m very pleased to say that two of the students that I have been working with over the last year or so are showing some of their work in London over from tomorrow (Friday 27th April) until Tuesday 8th May. The work will be on the walls at Calumet Photographic’s Drummond Street showroom. The students have both now left the NCTJ Photojournalism course at Up To Speed in Bournemouth and are making their way into the industry.

Deborah Yawetz – My interests are wide ranging; there is so much world to see, and people to walk in the shoes of! I enjoy news and wildlife photography: though seemingly different, both have a sense of immediacy, both are challenging and require patience, then finally responding to the moment. I have travelled a lot, most recently to Rwanda and the Serengeti.

I have published work in DV8 magazine in Bournemouth, Shed light events in London and a photo in the Daily ” Echo, Bournemouth. Work experience includes with Redactive publishing and The Times.

Elizabeth Wainwright – I’ve worked on programmes for NGOs in the UK and in various African countries, and I saw a lot that never seemed to be documented by the media, or to donors. Combining this insight with recent editorial experience on the UK’s longest running environmental magazine, and of course the Photojournalism training, means I am well-placed to bridge the gap between theory and practice; truth and cliché; and do so in an informed, thoughtful way.

I am equally interested in finding homegrown stories: urban beekeeping and UK homelessness are two local stories I am working on. ” The power of storytelling to inspire and trigger change at whatever level – is ultimately what motivates my work.

You are invited to an exhibition featuring work by two new photographers from Friday 27th April until Tuesday 8th May inclusive.

I have a folder full of images on my hard drive that I use for teaching. They aren’t always my best work but they help to illustrate a point better than others from my portfolio. This is a perfect example of that idea.

Sometimes you can see the potential for a picture but the picture isn’t happening. This is a common issue for news photographers who have to shoot pictures to go with stories about something quite specific but aren’t allowed to set a lot of shots up. This picture was to go with a very small story about an art exhibition that had been put on by some young female artists on a very tight budget. The venue was a shopping centre (mall if you are from the USA) and I could see that some human interaction with the work was the best way to cover it. I grabbed a tripod from the car and stuck my camera on it. Composing the frame was pretty easy and all I had to do was wait for the right people to walk past and look at the work. People came along and I tried various shutter speeds to get some blur in order to keep the ‘focus’ of the story on the art. Soon I was happy with my plan (1/10th of a second at f4.5 on 200 ISO) and I waited, shooting frames as people came past in ones, twos and threes. 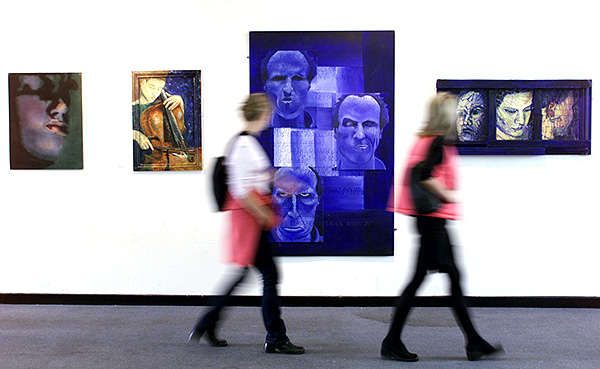 I could see these two women with very similar pink in their outfits coming. I could see that they were in perfect step and so the plan went from the occasional frame to a full burst (about 3 frames a second in those days) and got this shot. Of course I did a few more but the deep joy of those early digital SLRs was that you had great confidence in what you saw on the rear LCD.

The idea remains one that I use over and over again. I see pictures and I compose them around what’s there and then I just have to be patient and wait for someone or something to come along and complete the photograph. You can see the same idea here in an old post about walking with speed lights which has pictures taken a lot more recently!