It only seems like a few weeks ago that I was writing about how excited I was about being involved with the development of a new photojournalism course here in Bournemouth. It was actually well over a year ago and since then we have completed one cycle of the six month course and we are over half way through a second one. The course has already evolved and we are now in the process of recruiting people for the next course which begins in September 2012. 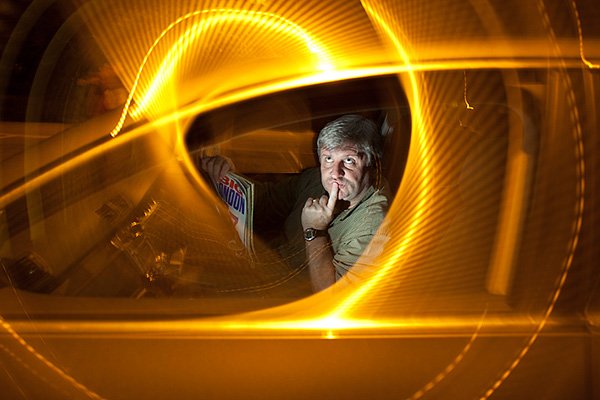 Photo of me playing the 'role' of a confused and lost motorist during a creative flash workshop. January 2012

The idea of the course is a simple one: to train people who already have a decent standard of photography to a level where they can start or improve their careers as editorial photographers. We cover news, features, portraiture, sport and several other sub-genres of photography as well as teaching about workflow, media law, video, caption writing and story development. At the end of the course, and all being well, our students have an NCTJ Preliminary Certificate in Photojournalism as well as a lot of business studies and market knowledge. It isn’t an easy course and it isn’t particularly cheap but it is highly focused on becoming a freelance photographer in today’s rapidly changing market place.

My own involvement averages out to one day per week during which I will bring all of my knowledge and experience into play as well as getting some of my contacts to come along to the course and give seminars and talks.

The course is run by Up To Speed Journalism, based in their offices at The Bournemouth Echo and is divided into two terms – one of which is very much theory and classroom based and the other is all about shooting portfolio pictures and arranging work placements. If you are interested in finding out more, please get in touch with Tom Hill at thill@uptospeedjournalism.com