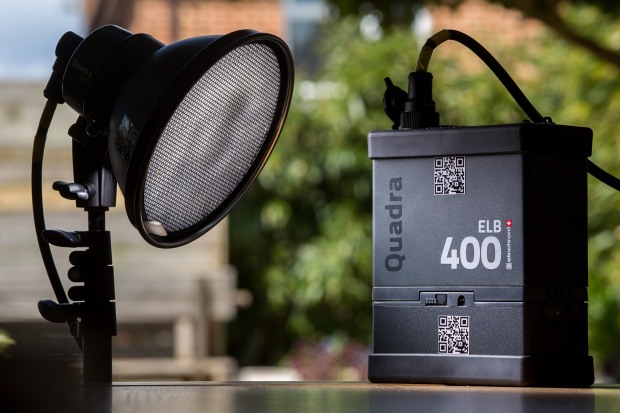 When I get a new piece of kit worthy of mention, I usually write a first hand account of how it is working out and go into details based on using it on a few jobs. I bought an Elinchrom Quadra ELB HS kit a couple of weeks ago and I thought that it was about time I gave some first impressions on this blog. Sadly, I haven’t used it for anything particularly interesting and I certainly haven’t stretched it beyond what I would normally do with my old Quadras (some executive portraits and a quick location shoot) but I can already see a lot of small but amazingly significant changes from the original system.

Those of you who read this blog regularly will know that I was very impressed with the Quadra when I wrote about it in my “32 Months On” and was further impressed when the Lithium Ion batteries came out. The differences between the ELB and the Quadra for most jobs aren’t huge but everything about the new kit tells me that the designers have listened and that the manufacturers have allowed their engineers to implement some great changes. For me, the positive changes with the pack are:

I have the new High Synch head too which brings one key improvement which is the ability to synch with my cameras at shutter speeds right up to 1/8000th of a second using the EL Skyport Plus HS Transmitter and I’ll talk about these a bit further down the page.

Let’s talk about the menus: back a few years I said this about Quadra menus “some bits of the menu system are not too obvious without the book. Changing stuff like the duration of the beep that signifies that the pack has recharged or whether the readout is in f-stops or watt/seconds isn’t too much of a problem but switching Skyport channels for the first time isn’t all that easy.” With the ELB I was changing stuff without having to resort to any instructions and the display is easy to read in just about any light. For me, this kind of progress is brilliant and it makes the new kit that bit easier to use – which is what you want, serious evolution rather than revolution.

When I swapped over to the Lithium batteries I posed the question “What do you call it when something that was already very good gets quite a lot better?” I went on to answer “an upgrade”. The downside of the lithium batteries is that if you leave them flat they can appear to be dead and not accept a charge, no matter what you do. When this happened to one of mine the marvellous folks at The Flash Centre reconditioned it for me. The new ELB pack has the facility to recondition batteries and that could turn out to be a real help. I try not to leave anything flat but if it happens again, I have the wherewithal to get myself out of that particular jam now.

As I said before, small improvements add up and the less heavily engineered and simpler port covers are great. Nothing revolutionary but a fair bit better than the old ones and the same can be said for the relatively small power bump from 400 watt seconds to 424. That’s a fraction of an f-stop but, to paraphrase a well know UK supermarket, “every little helps”.

So far, I cannot see any negatives with the new pack – a solid upgrade with some great functionality. The same cannot be said for the EL Skyport Plus HS Transmitter . That’s a mouthful so from now on it is the HS Transmitter and it’s infinitely better. It’s a lot bigger than the old Skyport – which is a great thing as I have always said the old one was unnecessarily small. The new one runs on AA batteries which answers another one of my criticisms. You get viewfinder feedback such as a ready light and, most importantly of all, you can now shoot with high speed synch if you have the right flash head. With the ELB pack there are way more functions built into the transmitter and all-in-all it is way more than an upgrade. If I have a criticism, it is pretty expensive but that’s all I can find wrong with it so far. 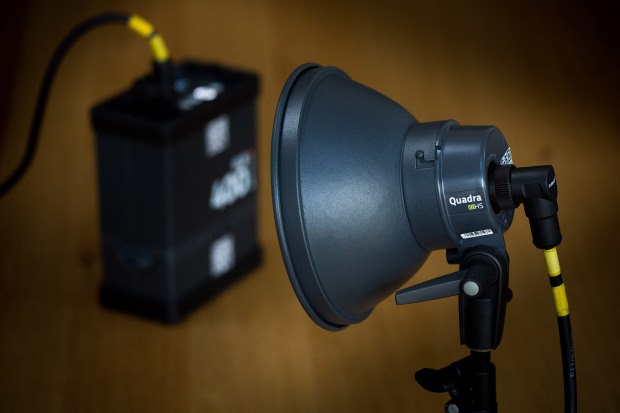 Moving onto the high synch head, well it looks and feels exactly like the old heads. It takes exactly the same accessories and cables as the old head and it definitely works when synching at shutter speeds in excess of 1/200th of a second. I have yet to give it a thorough testing but it appears to do exactly what it should – which is great.

Up until now everything I’ve had to say is positive and I am extremely pleased with my new acquisitions. I was asked the other day why I didn’t buy the Profoto B2 instead. The answer is that I wanted the backward compatibility of sticking with Elinchrom and I refused to pay the price for the Profoto. It has a TTL function which the Elinchrom lacks but I have no idea when or even if I’d use it and I don’t like the way that light modifiers attach to the B2. Maybe TTL would be another (the next) upgrade for Elinchrom’s ultra-portable. Maybe it would push the price up too far. Who knows.

What I do know is that, yet again, the engineers at Elinchrom’s Swiss HQ have taken a very good product that I had 100% trust in and made it better in every way that I can see. I’m a fan of these ultra-portable kits and I’ve tried pretty much every one of them since I first handled the Lumedynes and Normans back in the early 1990s. The Quadra ELB is one of the best bits of kit that I own and I will post some examples when finally get to shoot pictures that stretch its capabilities out beyond what the old Quadra could do.